Into The Backcountry With Jenny Jones And The House Of Powder

Looking to experience fresh Niseko powder? Dive into backcountry skiing and snowboarding with great guides and awesome runs for all levels from beginner and up!

It isn't every day that you get to meet a highly successful professional athlete and Olympic medalist, let alone engage in their sport with them! But that is just what we did this past weekend when we got into some fresh Niseko powder with Jenny Jones. It wasn't Jenny's first time here in Niseko, we got a chance to chat with her last time she came, but it was our first chance to ride with her!

While Jenny's skills on the slopes are of real epic proportions, not all of us were quite up to her level. Fortunately, Hokkaido Backcountry Club's cat skiing operations are set up with the purpose to provide access to the backcountry for riders of beginner to advanced riding ability, meaning you don't have to be a pro to find awesome powder! Our destination for the day was the newly re-opened Chisenupuri ski area. Now affectionately referred to as 'Chise', it is home to Hokkaido Backcountry Club's newest cat skiing operation, The House of Powder.

Check out the video below and read all the way down for photos and the full experience!

Cat Boarding In Niseko With Jenny Jones And The House Of Powder from Experience Niseko on Vimeo.

We set out early morning with Chris, our guide for the day, from the Hokkaido Backcountry Club to The House of Powder over at Chise. After a short ride from Hirafu, Chris ran us through the basics of backcountry safety, showed us how to use our beacons, probes and spades and walked us through how the day was going to go. It wasn't a full avalanche safety training, just enough to make sure everyone was comfortable with the contents of their backcountry pack in the event that something did happen. Whether you are a pro rider like Jenny or a simple amateur like the rest of us, it never hurts to go over your backcountry basics once again!

Chris was incredibly knowledgeable, having been in the guiding business for countless seasons. He was both an experienced guide and snow condition specialist, having been involved with numerous research and testing projects over the years. While the chance of an avalanche occurring are never zero, he assured us that we were in an incredibly safe area with excellent conditions for the day.

Once Chris had taken us through all of the key points to staying safe among the trees, he introduced us to the owner of the operation Clayton Kernaghan and he showed us their vehicle line-up. Clayton showed us all three of their snow cats, two fully enclosed and one open-top, and gave us a bit more information about the operation before we went up. Of course, we took a few photos, like the one of Clayton and Jenny below!

Clayton told us a bit about their mission being to open up the backcountry to newer and less experienced riders, like some of those in our group. “Expanding the backcountry is the biggest goal for Hokkaido Backcountry Club and we welcome non-experts, beginners to strong intermediates.” With the slopes at their new Chise location, they have an excellent location as gradation isn't too steep, making for good beginner to intermediate level slopes.

The House of Powder isn't the only operation that Clayton has helped put together to further the cause of helping bring more skiers and snowboarders out beyond the boundaries of the ski resorts. Hokkaido Backcountry Club also operates an overnight cat ski touring operation out at Shimamaki, roughly an hour - two hours from Niseko, as well as the only heli-skiing operation in the Niseko area. Maybe next time Jenny comes back we will get a chance to do a heli-tour!

The snow was really coming down as we headed up the Chise slopes for our first few runs. Chris gave us little tips and insights into our path and the terrain we would encounter, and he set out first to show us our line. Conditions were unbelievable that morning as it was nothing but fresh powder and new tracks all day long.

The level of detail to the information that Chris shared with us was truly impressive. You could tell that he knew the courses that we were taking intimately. If it is your first time in powder snow, having a knowledgeable guide can make all the difference. Even if you are a pro snowboarder like Jenny, it can still help to make all the difference to staying safe in the snow.

By the time we got back up for our fourth run, you could see from the original set of tracks that over ten centimeters of snow had fallen since our first run! 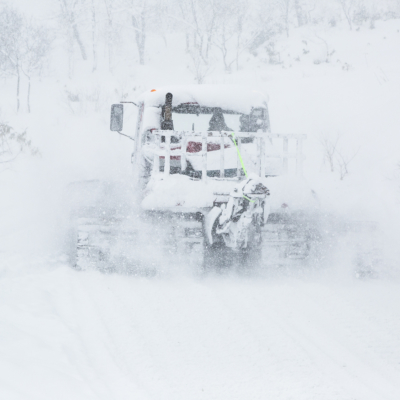 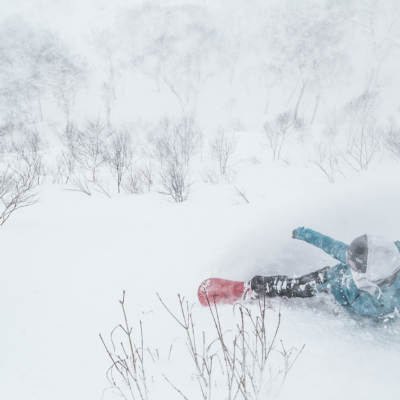 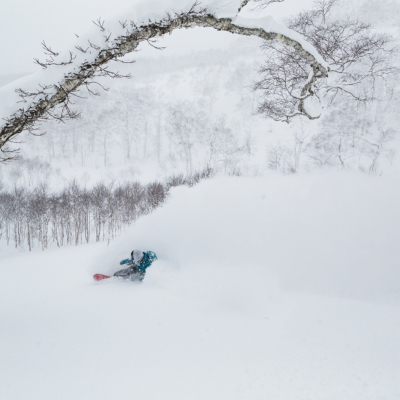 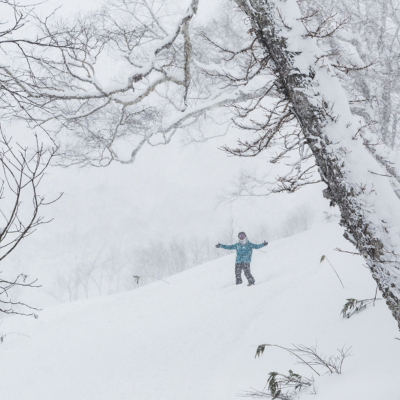 In total, the five of us got six runs in that morning, although we were taking it a little slow as we stopped to set up for some photos along the way. Each run was broken up quite nicely as Chris would meet up once or even twice mid-way through a run to discuss upcoming terrain and possible routes.

The terrain was pretty varied as a few of our lines were more open while others were in and among the trees. As there was no one on the mountain but us, you could easily take the same route and explore it multiple times in one day, finding new features and carving new lines through the fresh snow.

There were even a number of runs that we didn't get a chance to try out, but we will just have to save those for another day!

Jenny Jones is a professional snowboarder from the U.K. who saw enormous success in her competitive career in women's slopestyle. With numerous gold medal finishes at the X Games in the USA and Europe (2009, 2010, and again in 2010) as well as medals at the 2013 FIS Snowboard World Cup. Jenny finished off her competitive career with a bronze medal at the 2014 Winter Olypmics in Sochi, the first U.K. snowboarder to win a medal in the slopestyle category.

The House of Powder

Located less than 30-minutes from Hirafu by car, The House of Powder is the Hokkaido Backcountry Club's cat skiing operation at the Chisenupuri ski fields. Re-branded as "Chise", the ski area first began operation in 1977 under the management of the town of Rankoshi. The town itself, well-known as an onsen town, is home to many of the area's most popular onsen retreats.

With easy access to good powder and excellent onsen, Chise was a popular local favourite, but declining populations in the rural area forced the Rankoshi town to close the operation in 2012.

With its new cat skiing operation, both veteran powder-seekers and those keen to explore the backcountry for the first time will be glad to have such a conveniently located option!

For more information about backcountry experiences or to make a booking, check out Hokkaido Backcountry Club's website.