It truly was a snowtopia at this year's Yukitopia Snow Festival in Kutchan town.

While Kutchan's Yukitopia Snow Festival isn't the same scale as Sapporo's Snow Festival or Otaru's Snow Light Path Festival, being a small local festival, it has a unique close-to-home charm which neither of the two larger winter events can hope to imitate. In a country where festivals are so abundant, small local festivals like Kutchan's Yukitopia Snow Festival can be some of the most impacting and meaningful, especially from the perspective of a traveler. These smaller events often go unnoticed by major international news sources and as such they don't usually draw attention from international travelers. Given the particularly unique demographic within the Niseko area due to the presence of the international Niseko Resorts, many of the local festivals, while still wholly Japanese in spirit do cater to international locals. For such a small festival to also have a schedule and map with a full English translation is also a hallmark of the Niseko area truly making Kutchan town's Yukitopia a rare chance to glimpse rural Japanese culture.

While it is needless to say that Kutchan Town's winter celebration is a huge hit with the local community, it has been increasingly popular with travelers to the resort area as well as seasonal staff who help the nearby ski resorts keep running. For those who we bumped into that day, it was commonly remarked that it had an entirely different atmosphere from that of the larger festivals mentioned above. The local festival is aimed at families with children of all ages and was action-packed full of fun activities, live performances, prize contests and more it was plenty of entertainment to keep a family entertained for a half or full day. 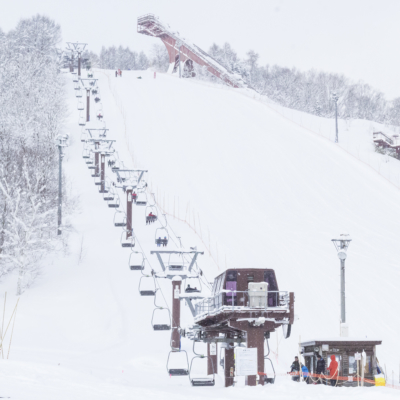 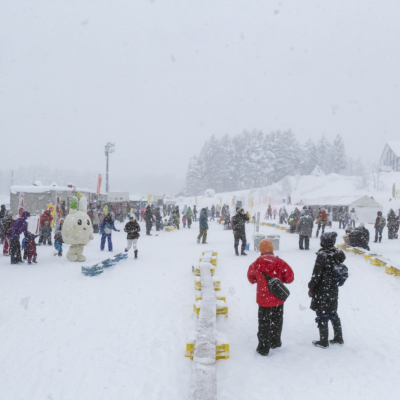 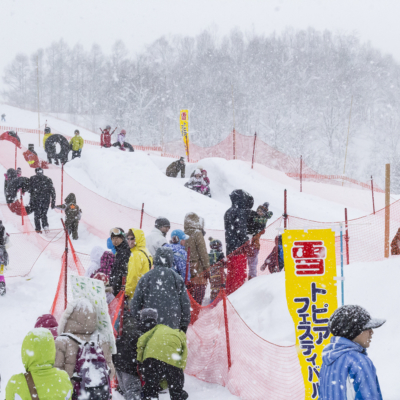 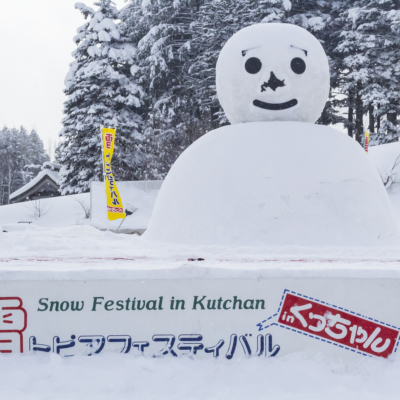 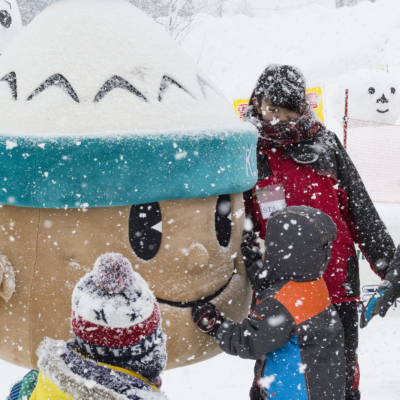 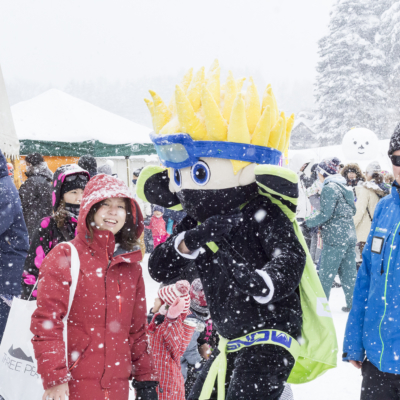 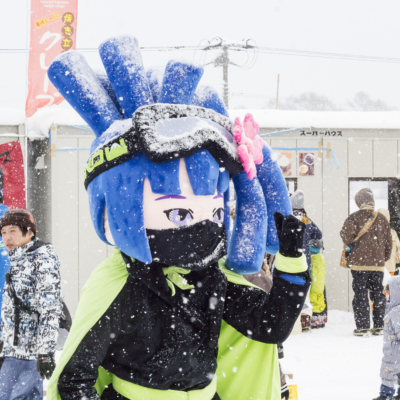 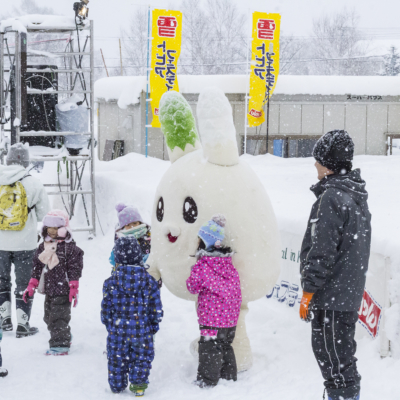 Located over at Kutchan Town's Asahigaoka Ski Resort, the lift was offering free skiing and snowboarding for anyone who wanted to take in a run or two in celebration of the event. With a free ride to the top and a nice layer of fresh snow from the night before, the slopes certainly drew in some numbers over the weekend. While many flocked to the slopes, others crowded around the main stage and even more still lined up for turns on the tube slopes or a bite of something yummy to eat.

The main stage featured a number of daily performances ranging from traditional Yosakoi Soran dance performances to a live action Kamen Rider show aimed at children. The Kamen Rider series is similar to that of the Power Ranger series on western TV, so you can imagine the captivating effect that the live show had on the children of young families in attendance! You've never seen a crowd of children sit so still in the snow.

Colourful mascots from local towns and businesses came out to show their support and posed with children and adults alike for photos and videos. Kutchan's Jaga-kun or Potato Boy alongside Kimobetsu Town's Usapara-Kun (Asparagus Rabbit Boy) were big favourites in the morning. And in the afternoon Hirafu-based international ski school GoSnow sent reinforcements with the Ninja Kid and Ninchan joined the mix. 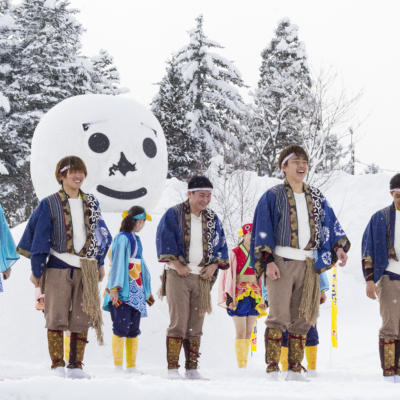 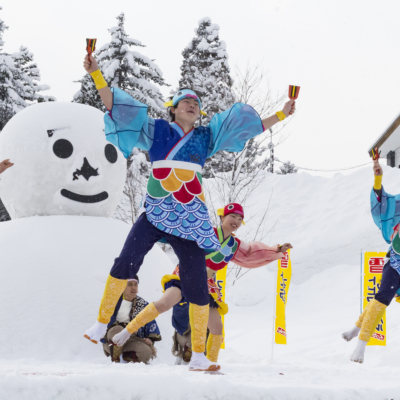 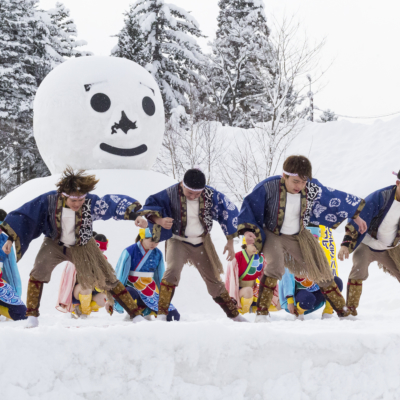 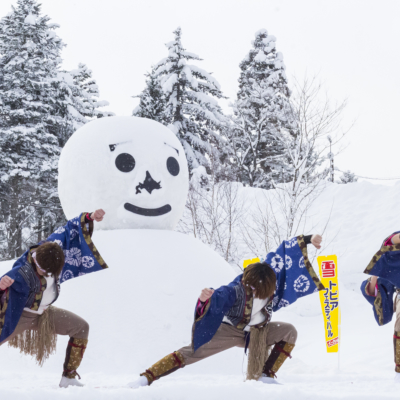 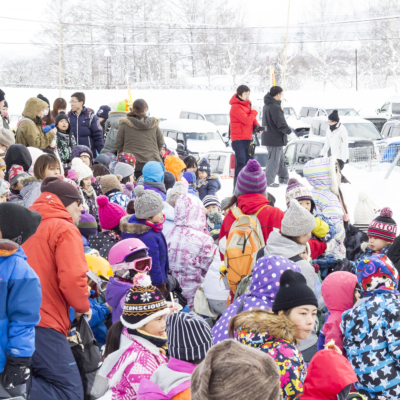 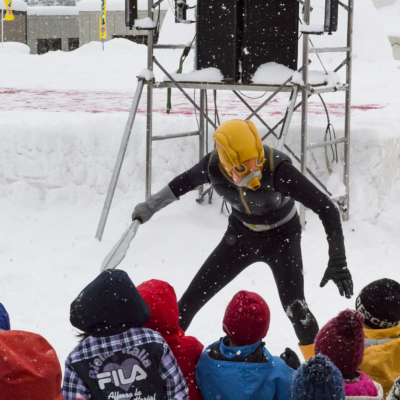 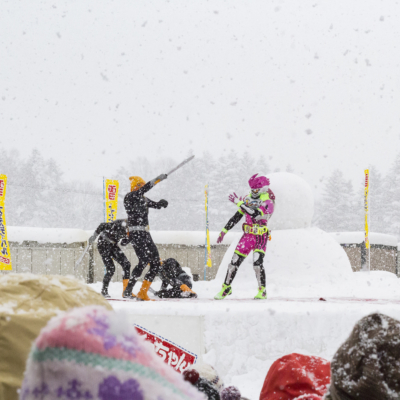 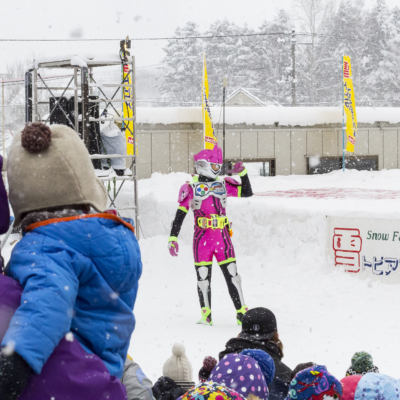 Ninja Water Run and Glide! Across the Water

Of course, it wouldn't be Yukitopia without the two daily main events. Whether you go on the first or second day, you are guaranteed to be equally entertained!

On day one contestants tested their ninja skills with a run across a pool of ice cold water... although they don't always make it! Day two was no less exciting with contestants trying to ski, board, or jump across the long pool of water

You will often see some pretty strange characters coming out for these events. Perhaps there is power in the costume? Unfortunately, it doesn't seem that was the case for the runner in red below!

Go Snow's Ninja Kid and Ninchan also partook in the annual "Glide! Across the Water!" on Day 2 although they didn't quite make it either! 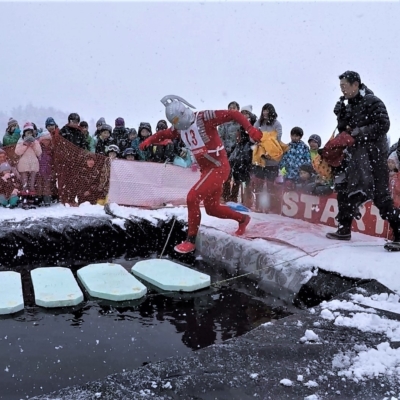 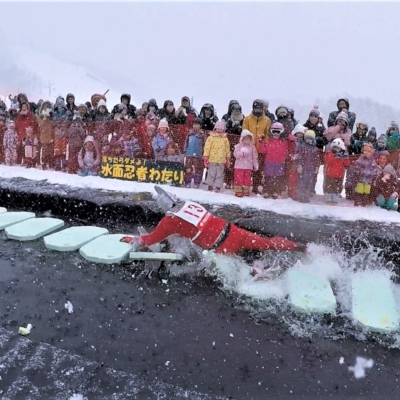 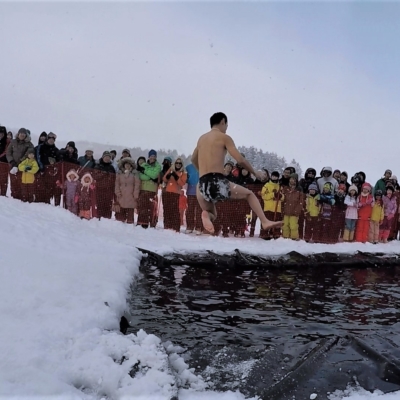 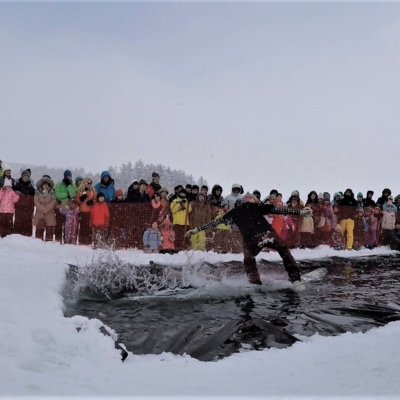 In addition to all the live spectacles, daily activities kept visitors busy between shows. Skiing and tube racing from the top of the slopes were aimed at older children and adults. For younger children, a mini tube slope was constructed and the popular strider bicycle brand had a winter strider slope set up as well.

Shops and stalls, some purely for the events and others sponsored by restaurants from around the Niseko area were spread around the festival grounds. One of the best parts of festivals are the food stalls, which typically serve up a range of traditional dishes from yakisoba (fried noondles) to takoyaki (fried octopus balls). For anyone looking to get a taste of Japanese festival cuisine, Yukitopia did not disappoint!

With everything going on, there were ample opportunities for sharing laughter and good times and friends and family. If you missed it this year, be sure to check out our Event's page leading up to your travel dates next winter. The festival is always held in mid-to-late February and is an excellent way to mix up your time in Niseko a bit, regardless of whether you are travelling with a family with young children or not. See you next year!