Snowshoeing All Day And Night

Niseko's world-famous powder snow can be enjoyed in many ways beyond just skiing and snowboarding. While for many, getting out Niseko's gates and into the side and backcountry is why they come, there are so many other ways that the snow can be experienced.

If you are looking for another activity where you can get out into the fluffy Niseko powder that isn't skiing or snowboarding, then snowshoeing is an experience you won't want to miss out on! While it isn't the kind of activity that is going to get your adrenaline pumping to the same degree as tearing down the mountain on a pair of skis might, there is something particularly enchanting about being able to walk atop literally metres of snow without having to plow through. 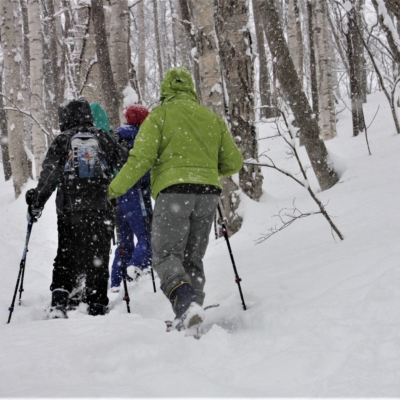 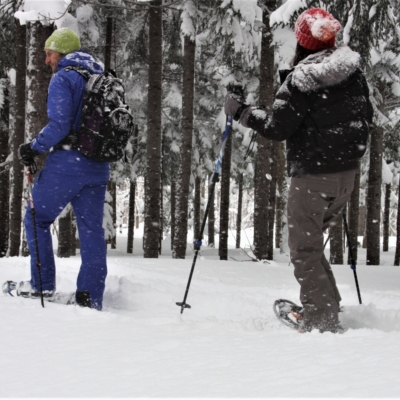 Niseko's powder snow is pretty fun to play around in and can turn just about anyone back into a kid. That said, it can be a real pain to walk around in when there is a big snow dump. If you've been here in the winter, you will have seen an endless number of snowplows working to clear up the roads and pathways, you might have even cursed them for waking you up one morning. It does happen sometimes and though it might be irksome to wake up from a snowplow, it is hard to imagine what life would be like without them. They move an average of 12 - 15 metres of snow each year and if it weren't for them the whole Niseko resort area would be paralyzed. This is one of the reasons that many businesses in Hirafu thrilled when the road heating project was finally completed a few years ago making the main street in Hirafu much more navigable for guests and residents alike.

This is what makes snowshoeing such a unique activity. With a pair of good snowshoes you can actually walk on top the snow rather than having to push yourself through it. It is hard to explain and even hard to understand when looking at photographs of people snowshoeing as the pictures are incredibly deceptive. Seeing a line of people walking on top of the snow, or just a few centimetres into it, makes it look like you wouldn't even need the snowshoes. Take them off and suddenly you start to sink and struggle and you realise how big a difference they really make.

Just like any activity, when you head out and where you go can make a difference in your overall experience. So we went ahead and tried out a daytime and nighttime tour at two different courses with our friends from NAC to give you an idea of what to expect.

For our daytime tour, we headed over to Hangetsu Lake, at the foot of Mt Yotei. The course that we took that morning was designed to be an easier one that was accessible to anyone, regardless of age or level of fitness. A daylight tour is probably the best place to start if you have never gone snowshoeing before. Visibility is going to be better and you will have an easier time getting accustomed to your balance.

While it didn't look like the snow was all that deep that day, when the guide showed us the trail sign, which is over a meter tall, all that was visible was a bit of the top! This little instance really showed how deceptive snow depth can be and was enough to impress us that perhaps the snowshoes would have some purpose after all!

Each course is a bit different. In terms of difficulty and duration; there are a selection of easier courses and more challenging courses. Scenery and novelty varies with each trail, too. The Hangetsu Lake course is particularly exciting as you can walk out onto the frozen lake if you are feeling daring enough. Of course, you don't want to do that if you are by yourself or conditions aren't right as it could be quite dangerous. Walking along the foot of Mt Yotei is also pretty interesting and provides a perspective a bit unlike when you are staring at it from afar.

Along the course, we had plenty of time to take in the scenic sights and views. You might be inclined to start a snowball fight along the way like we did, just make sure you aren't picking a fight with innocent bystanders! During the break time, definitely let yourself fall back into the fluffy white snow, maybe make a snow angel or two. If you are planning an activity with children or for the entire family, we would recommend an easy course like the Hangetsu Lake course.

Nighttime in Niseko is magical for so many reasons. We have long been champions of the amazing night skiing and anyone who has been here can tell you that the resorts and nearby towns take on a magical glow when it snows in the evening. When it isn't snowing, the winter night sky is lit up by millions of gleaming stars and that in itself is worth setting out on a nighttime tour. With a pair of snowshoes and a guide who knows the way, you can hike out into a place that is truly dark and on a good clear night this will make the stars significantly more visible.

Don't let the photo above fool you! It only looks like the sky is so bright because we took a long-exposure. In reality, there was a faint orange glow on the horizon from the nearby ski resort and above us a black canvas dotted with glowing white orbs.

For this night tour, we chose a moderately longer and harder course which took us along the shore of the Shiribeshi River. One of the things to keep in mind when choosing between a day or night tour is the difference in conditions. Once the sun goes down, it isn't just the amount of light that changes, but the temperature as well. It was a pretty chilly evening, so wearing an extra layer and warm pair of gloves was essential. We borrowed headlamps from NAC along with our shoes and poles and with that we set off! 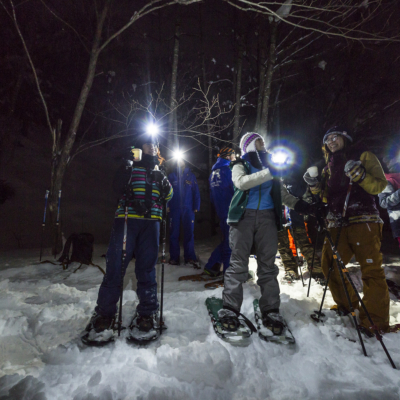 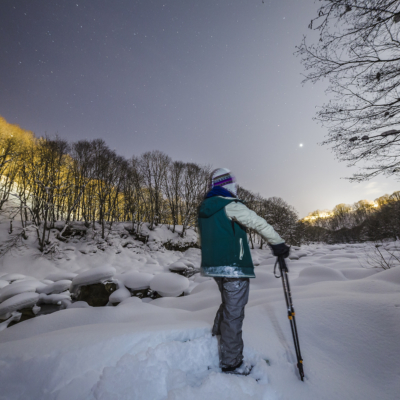 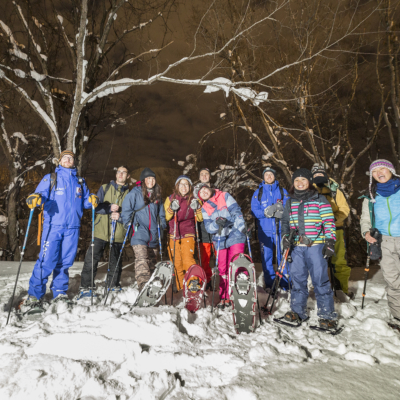 Conditions in the evening are always going to be different, just like during the day. While we were able to go on a clear night with the stars and half-moon hanging in the sky, some evenings it will be overcast. That shouldn't put a damper on your mood though as even without the glittering stars, Niseko at night has a lot to offer. Going in the evening certainly adds a bit of romance to the experience, so that might be a bit of an added plus for any couples out there looking for something to try after a day on the slopes.

The Shiribeshi course has a lovely charm of it's own compared to the hike at Hangetsu Lake. Being able to clearly see Mt Yotei is a sure way to leave lasting memories. The riverbed itself was particularly exciting as the snow that collects above the rocks along the riverbed form into little mushroom-like pillows of powder.

This particular trail was a bit more challenging. There were sections where we had to push ourselves a bit harder to make it up an incline and moments where you can almost ski as you slide down. Just like every tour, there is time to rest, play in the snow, and take photos of the sky, the sights and the group. That said, this trail might be a bit much for young children not just due to the difficulty but the slightly longer course. We would recommend longer courses like this one for adults or adolescents.

How do you choose between daytime or nighttime?

This one is tricky as it is entirely subjective. When we went, half of our group preferred the daytime tour and the other half preferred the evening. Both had their rewards and challenges. If you have never tried snowshoeing before, we might suggest starting with a daytime tour as it would make dealing with the unfamiliar a bit easier. That said, if you enjoy it and are keen to experience an evening tour, don't dismiss it as it is quite different from a daytime tour!