Go With The Flow

We sat down with Teppei Nakajima who has spent the summer of 2016 building Niseko's first mountain bike flow trail.

It's pretty rare to actually get Teppei Nakajima sitting still—he's either guiding people to Niseko's best powder or tearing it up on his mountain bike, depending on the season! Here is what he had to say about the budding mountain bike scene here in Niseko and why we should all be so excited about it.

Experience Niseko: Please tell us a little bit about yourself and how you found yourself here in Niseko.

Teppei: I actually grew up in Tokyo and came to Niseko about 10 years ago. I'm now 42 years old, but I moved here from Canada. I'd spent four years in Whistler, B.C. and wanted to find somewhere in Japan where I could use all of the experiences I had gained over there. At that time, Niseko had just started to get foreign guests so I thought it would be a good opportunity for me.

EN: How has Niseko changed in those 10 years?

Teppei: Back then, there were not many people living here permanently and it was still a bit of a party town, not so serious. It meant that it was hard for the local Japanese people to communicate with the foreigners, both in terms of language and culture. Now you can walk around and find so many people who are able to speak both Japanese and English, both foreigners and locals. So communication between people is much better. It's more like "Niseko Republic" now, not just Japan! More of an internationally diverse community.

EN: Why did you decide to stay?

Teppei: Initially it was because my snowboarding career was getting better and better, so I could get more work and have a nice lifestyle. It started to become clearer in time that many people were working towards making Niseko a true year-round, four season resort. So I had the opportunity to work on my mountain biking, too. I got involved in the summer season and since I started that, to be honest, I am desperate to see it through and to finish it.

EN: How close do you think we are to being a four season resort then?

Teppei: Over the past couple of years the atmosphere has really changed in the resort during the summer. More and more guests are coming and particularly more families and younger people. It makes the resort feel alive and you can sense the kind of excitement building about summer in Niseko.

EN: Great! So could you tell us a little about the flow trail and how that started?

Teppei: Basically, the whole idea came from Yoshi Tanaka, who is one of the Kutchan Town Councillors. He found a company called Alegra from Switzerland when he went there to visit St Moritz for the 50th anniversary of the sister city relationship with Kutchan Town. Allegra really introduced the idea of flow trails to much of Europe and helped to develop the trails and grow the sport. They are also now working across the world helping to design trails.

We had two guys from Allegra who came to check out the Niseko area and the potential for mountain bike tourism. They made a draft design last year (2015) and then this year (2016) we were able to access some funds from the government to build the first flow trail. It's basically a trial or test to show the government that it can work to grow summer tourism. If we get enough data and feedback from guests about the operations, then we can build more.

This year the trail is only open a few days for testing, not for public use every day, but we are hoping to get positive feedback from the testers who are coming from all over Hokkaido and then to take that feedback to the government. We also have to show that the trail doesn't damage the mountain permanently or cause any erosion for example.

EN: Can you explain the main difference between a "flow trail" and "downhill mountain biking"? I think a lot of people have an image of mountain biking only being suitable for extreme sports fanatics with full body armour!

Teppei: To put it simply, a flow trail is easier—it has a shallower gradient and banks on the turns. It's never flat, so you always have some rollers or some features. It feels more like you are riding a roller coaster. A flow trail gives you the feeling of zero gravity on a mountain bike and people really enjoy that sensation.

Flow trails are also better for the environment as they case less erosion damage. Most importantly, of course, they are suitable for all riders from beginner to advanced. Beginners can take it easy and go slow, whereas advanced riders who want to go fast have to brush up their skills because it will be tough. So the courses are great for everybody. 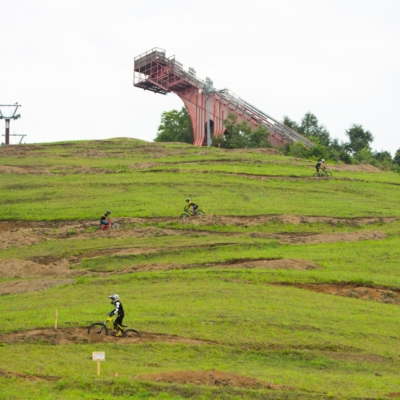 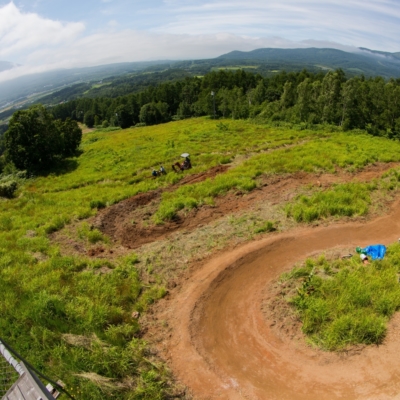 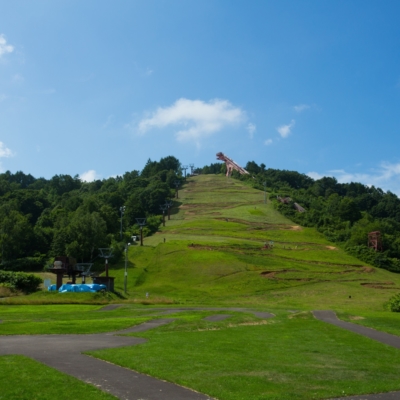 EN: That's good to hear! Could you tell us a bit more about the course you built this summer?

Teppei: Sure. The course is located on the Asahigaoka Ski Hill, just behind Kutchan Station. You can recognize the ski hill from the old ski jump that is still there.

The course is about 1.3km long and took us about 20 days to build with a team of seven people working on it. It can be used by children from about 10 years old because the surface is really smooth, almost all dirt with very few rocks. It is really good for beginners because of this reason.

EN: Can you tell us about what happens when people come to ride?

Teppei: For the test days we will drive people up to the top of the hill in some vans, not use the lifts (although we hope to use the lifts in the future). People can come and check in, we'll give them a safety lecture and then get them on the course!

EN: Sounds simple enough! And what comes next?

Teppei: The future potential is huge. I've been building trails around Niseko for the last 10 years and I'd love to connect them all—for example from Hanazono through Hirafu to Niseko Village. We can use the lifts in the major resorts, of course, so people can get up the mountains nice and easily.

I don't think summer will ever be busier than winter, but there is so much potential here. In summer it feels like you are in an alpine environment, in the middle of nature. It's so good for the spirit.

EN: If you could ask for one thing from the resorts... what would it be?

Then I think we would have a real bright future all year round!

Teppei works as a mountain bike trail builder (and rider!) in the summer and a ski and snowboard instructor in the winter. He's fluent in English and in Japanese and experienced in both western and Japanese cultures—a perfect example of the people who make this resort so special.

You can experience the first ever flow trail designed by European specialists in the whole of Asia if you visit Niseko in summer... and there will be more to come!